Pyrochlore Composition As Indicator For The Carbonatite Evolution Stages At Sokli?

Pyrochlore is a common accessory mineral in granite pegmatites, nepheline syenites and carbonatites. The general chemical formular is A2-mB2X6-wY1-n â€˘ pH2O where A includes Na, Ca, U, Th , Pb, REE, Ba and Sr; B includes Nb, Ta, Ti, Zr and Fe; X = O and OH; Y = O, OH and F. The ability to accomodate many different elements leads to a wide range of pyrochlore varieties.
In Sokli (Finland) pyrochlore composition has been interpreted as indicator for the carbonatite and phoscorite evolution (Lee et al. 1999). Each magmatic stage broadly agrees with a field of pyrochlore compositions . But also within single rock samples, pyrochlore shows intense zonation and large chemical variation.
In the drill core sample 512.149.3-4 (Stage IV) we found pyrochlore crystals with a very complex and recurrent compositional zonation. These crystals are all up to 2mm in diametre. They all show an opaque, orange brownish core with oscillating zonation (2), followed by a dark brown inhomogenous mantle (3). The sample in figure 1 exhibits beyond that a clear dark brown zoned core (1). As shown in the back scatter image of figure 1 (right) the orange brownish part is separated from the dark brown parts by alteration lines (4).

Figure 1: Photograph of an intense zoned pyrochlore (left) and the corresponding back scatter image (right). (1) dark brown zoned core; (2) orange brownish core with oscillating zonation; (3) dark brown inhomogenous mantle; (4) alteration lines.
In this pyrochlore four different magmatical respectively hydrothermal compositions can be distinguished. The brownish core is enriched in U, Ta, Mg, Th and Ti (compared to the other parts), poor in Na, Ba, F and Sr. The orange brownish area shows the highest content in F and Na, further a slightly higher Pb content compared to the brown core. It is free of Ba, Sr and U and poor in Ta, Si and Ce. The outer mantle exhibits the most complex chemical composition. There, each element covers a wide range of content (figure 2). The hydrothermal event enriched the pyrochlore with Ba and Sr an depleted it in Ca, Na, Pb, Y, La, Nd and F. Even the Nb content is lower. In figure 2 the ratios of some elements within this pyrochlor are shown. The different growth zones can be clearly distinguished. This obviously conflicts with the findings of Lee et al. (1999) 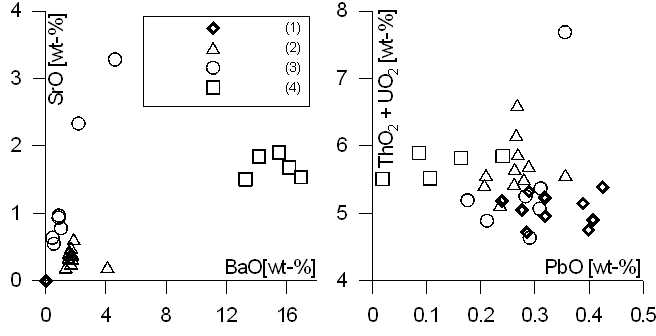